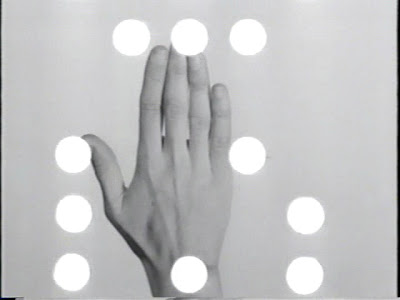 Hand Movie (1966) was American dancer/choreographer/filmmaker et writer Yvonne Rainer's first foray into filmmaking, it came into being as the result of her confinement to a hospital bed when she was seriously ill et recovering from major surgery. Hand Movie is an extraordinary et unique experimental dance film, it presented a way for Rainer to perform when her body was incapable. the film consists simply of two continuous medium close-up shots of Rainer's disembodied right hand, held upright, presumably against the blank wall of her hospital room.

Rainer proceeds to move her individual fingers independently, her middle finger acting as a soloist of sorts, flexing/contracting/bending them up/down, rotating her arm to reveal the palm, her fingers rub/twitch/flick/contort/slide et criss-cross underneath et over-the-top of each other, then open out. Rainer constantly changes the angle/position of her hand, rotating her wrist to reveal palm-up/palm-down, side/profile, presenting the audioviewer with different viewpoints et perspectives of her wrist/hand/thumb/fingers exploring variations of movements et gestures. 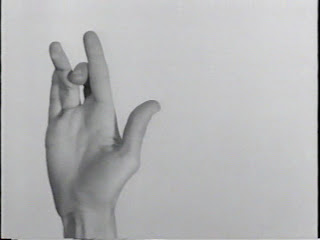 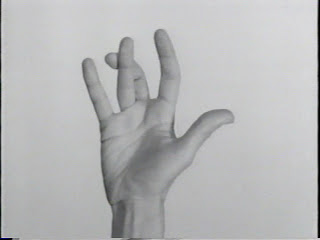 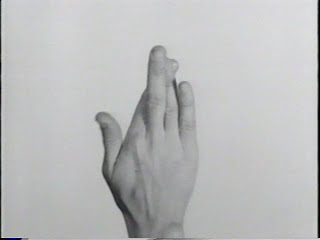 it is quite remarkable how supple et flexible Rainer's fingers are et the amount of control she demonstrates over them, Hand Movie is a deceptively simple performance, yet it is only when you attempt it yourself that you can appreciate the skill et practice it must have taken to choreograph et perform. the film can be read as an exploration or demonstration of the hand's mechanics.


"How to use the performer as a medium rather than persona?
Is a 'ballet mechanique' the only solution?" {Yvonne Rainer}

Rainer creatively used Hand Movie as a way to continue et extend the minimalist/functional choreography she had firmly established with works like the seminal Trio A (1966), where she was reducing dance to the bare essentials, focusing on simple, repetitive, everyday movements, giving them new significance et possibilities. in many ways Hand Movie perfectly represents et illustrates Rainer's ideas of demystifying dance et rejecting any form of persona or narrative which she formulated/declared in her "No Manifesto" in 1965. 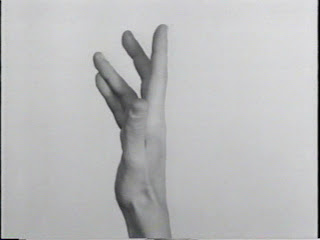 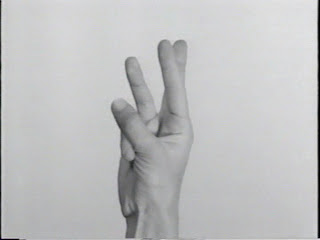 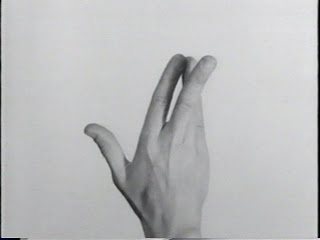 the film is completely silent, that is, without any room ambience or musical accompaniment, this allows the audioviewer to focus completely on Rainer's mesmerizing et beautiful hand/finger movements/gestures et variations.


No Manifesto (1965)
No to spectacle.
No to virtuosity.
No to transformations and magic and make-believe.
No to the glamour and transcendency of the star image.
No to the heroic.
No to the anti-heroic.
No to trash imagery.
No to involvement of performer or spectator.
No to style.
No to camp.
No to seduction of spectator by the wiles of the performer.
No to eccentricity.
No to moving or being moved. 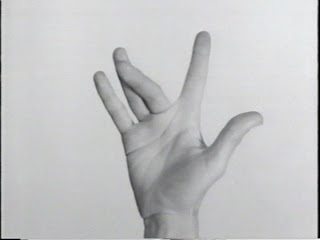 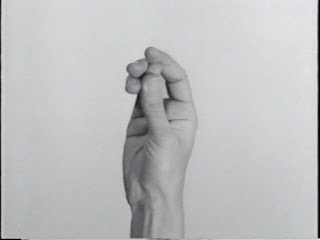 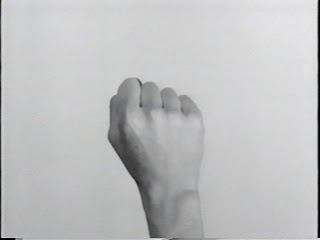 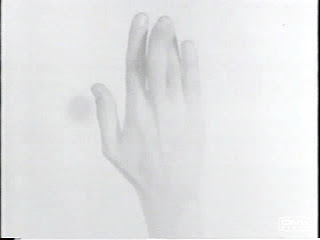 Hand Movie was photographed by fellow dancer William Davis. it is in fact made up of two takes, or precisely two complete rolls of 16mm film that last approximately 3 minutes each. the film/performance does not have an end proper, that is, it does not resolve, which adheres to Rainer's manifesto, instead she consciously includes the film burning-out to a white screen as the camera negative runs out. like everyday life we gets a sense that Rainer's hand performance will be repeated endlessly with subtle variations over time.

you can watch Hand Movie below:

the mp3s posted here are for sampling, these samples are meant to benefit the bands, my intention is to share the music so people might discover new artists they may not have otherwise. if you are the owner of a song i posted and want it taken down, just message me.